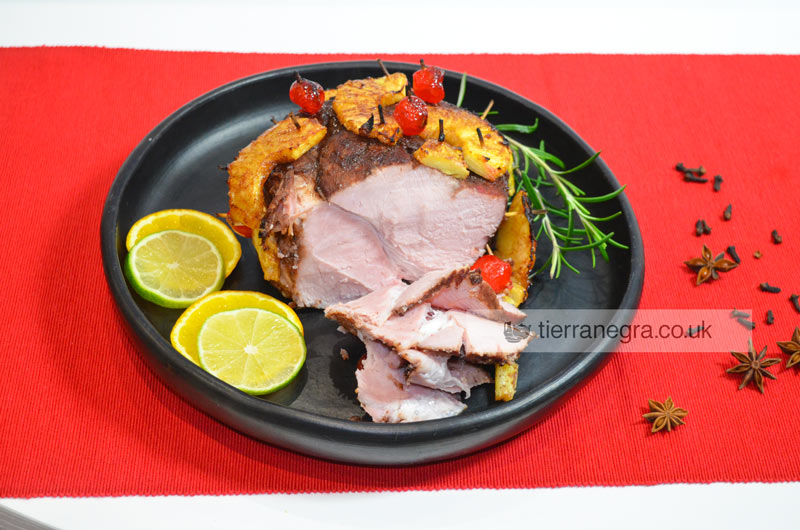 At home in South America, as in many other countries, Christmas is one of the biggest family events of the year and we celebrate it with gusto! With long school holidays and a strong catholic tradition, there are many church and other Christmas festivities, great Latin music and an enormous variety of traditional and imported Christmas foods.

Cured ham is a European and North American tradition that first arrived in South America with the Conquistadors and then commercially in the late 1800s. It is popular in recipes like “Jamon Planchado”, which is cooked with locally produced, unrefined whole cane sugar. A colourful dish that can be served hot or cold, it is often the centrepiece at the table during the Latin American Christmas and New year celebrations.

In the recipe below we use pineapple, moscovado sugar and spices to make a delicious treat that your family and guests will be sure to remember. The ham needs to be slow-cooked on the hob and then baked in the oven. This makes it the perfect recipe to cook in our tierra negra™ dishes. 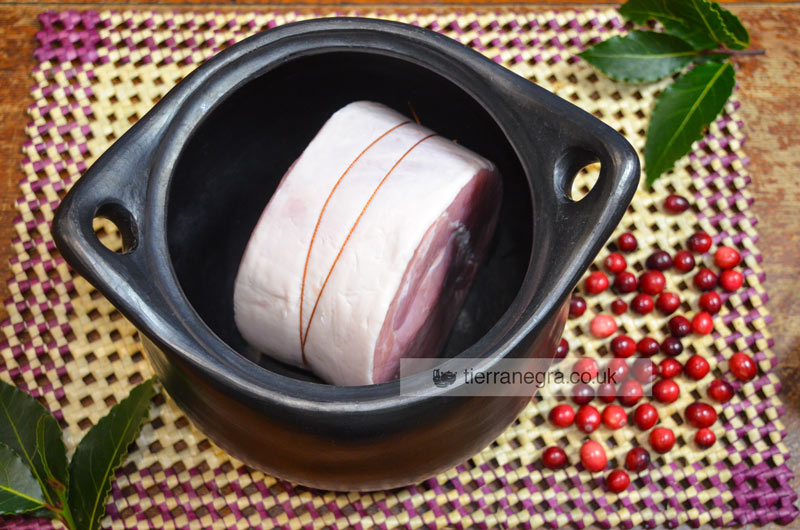 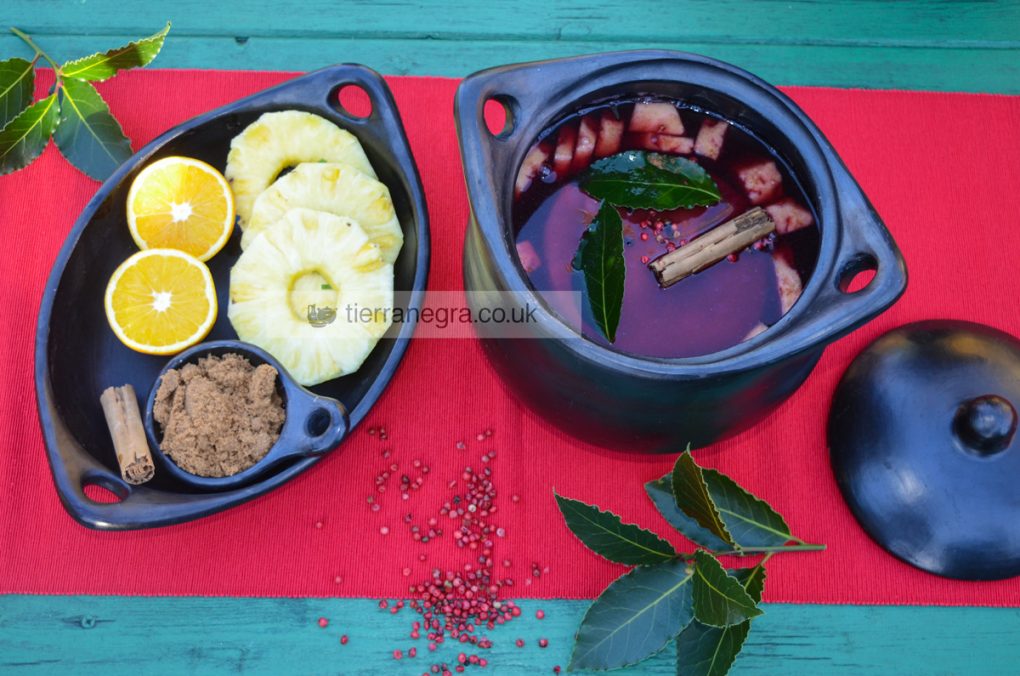 Place the gammon joint in a deep cooking pot and add half the pineapple slices. Pour over the orange juice, the bottle of red wine and enough white wine to cover the gammon. Add the cinnamon stick, 150g sugar, bay leaves, cloves, pepper kernels, star anise and bring to the boil. From cold this can take 10-15 minutes.

Reduce the heat to simmer, cover with a lid and cook for 1 hour. (The tierra negra™ pots retain heat very well so the liquid will continue boiling for a little longer.) Take the ham out, wrap loosely in aluminium foil and leave to cool. Keep some of the liquid from the pot as this will be needed later for the glaze. 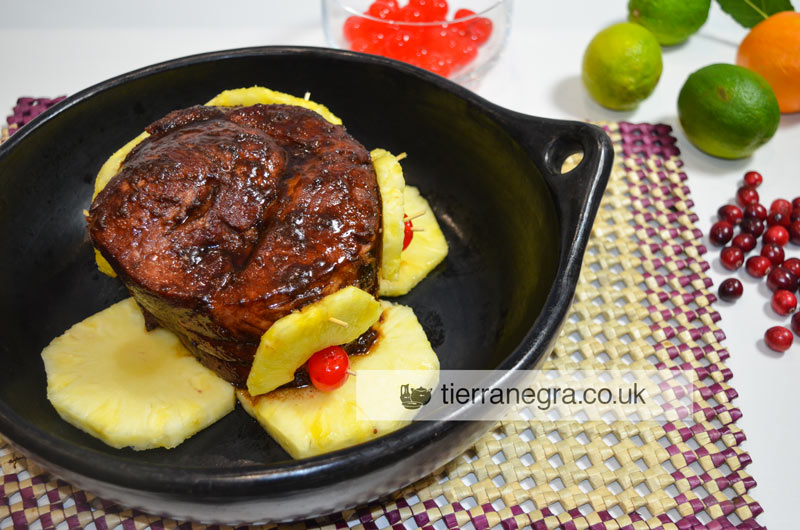 Cut away the excess fat from the ham. Pour over a little of the liquid from the cooking pot and pat a thick layer of the sugar and cinnamon mixture onto the entire surface of the ham. This will produce a sweet sticky glaze.

Place the ham in a baking or sauté dish. With wooden cocktail sticks, attach pieces of pineapple and some cherries to the surface of the ham. With baking, the pineapple will add a delicious taste of fruit to the ham. Baked pineapple is also superb to eat itself. 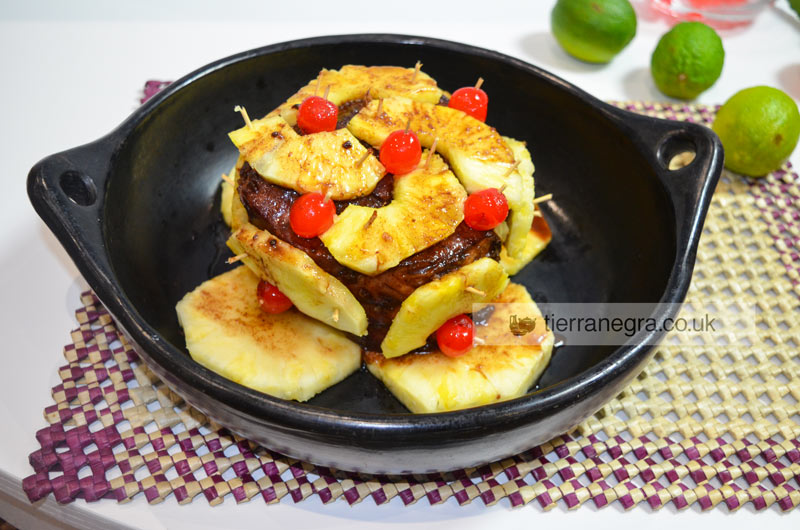 Pour over a little more of the liquid from the cooking pot. Bake the ham uncovered in the oven at Gas mark 4 or 180 ˚C (Fan 160˚C) for 25-30 minutes or until the glaze has caramelised and the pineapple is golden brown. Make sure to baste the ham a couple of times during baking so that it remains moist and succulent. 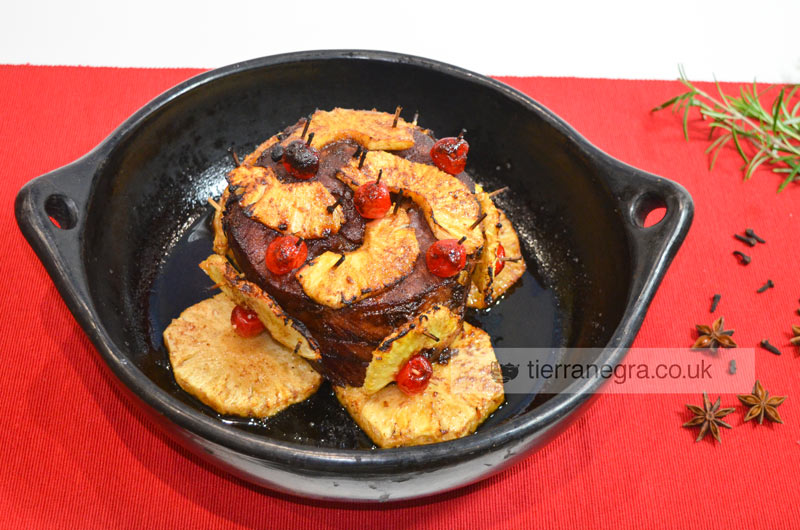 More than a blog about how to cook, in this blog we would like to show you how we cook with the ceramic tierra negra® cookware, and encourage you to use hand made cooking pots, casseroles and sauté dishes to prepare and present your food. Read more